Last show I looked at songs about bonuses promised to WWI veterans.  I thought this time I’d look at some songs about the war itself.  Because blues weren’t recorded (and its not even entirely clear what form the blues existed in) during the years that the US took part in the Great War, there aren’t that many songs about it.  But several blues artists did look back to recall the war, the army, and the effects on their lives at home and abroad.
Kingfish Bill Tomlin’s Army Blues tells a story of going to war talks about a soldier in combat in France:

Now it was late last night, late last night
I said late last night, I knocked on your door
You were so lowdown and dirty, you'll reap just what you sow
She cried please Uncle Sam, please Uncle Sam
She cried please Uncle Sammy give him one more chance
Won't you please hurry your steamboat and bring my man from France
I want to sit down, write a letter, mail it to my dear old Uncle Sam
I want to sit down, write me a letter, mail it to my Uncle Sam
Tell him when the war is all over, please take him out of that jam
So it was fourteen days, fourteen days
Mama it was fourteen days off on that deep blue sea
Met old Kaiser and his men and they were playing "Nearer my God to Thee"
So we went down into Belgium, we drilled down on the firing line
We marched down into German, drilled up on the firing line
We did everything in the world to change old Kaiser's mnid

Nearly 400,000 African-American soldiers served in the First World War almost all of them drafted.  Nearly 40,000 of those were combat troops that served in France.  Most served as laborers at army bases at home and abroad.
War and the draft inevitably created the classic blues situation of a man separated from his woman.  Clara Smith talked about the government stealing all the men in her life to serve in the war effort in Uncle Sam Blues:

Clara Smith from 1924 singing about losing her man to Uncle Sam.  Ma Rainey took on a similar theme saying she’s follow her man off to war if she could in a song called Army Camp Harmony Blues:

Texas musician Coley Jones had an interesting take on the combat experience in the Great War with a very interesting song he recorded in 1929 called An Army Mule in No Man’s Land. The song is actually a version of a song written during the war and performed by Billy Beard of the Al. G. Fields Minstrels, a popular white minstrel group.  I don’t know if Coley Jones served in the war or if he intentionally personalized the song to reflect his experience or that of the general black soldier.  But his story making sure his life is valued above that of a mule must have reflected the thoughts of many in an army infused with institutional racism: 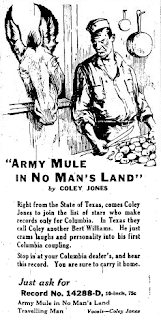 Deacon Jones left his congregation about two years ago
Going to help his country fight
Says he didn't mind going out in no man's land, he knowed that Uncle Sam was right


They put him on that mule that pulled that cannon round
Captain told him "right there you must ride"
He looked at the captain, said "That mule's gonna ride its place, but let me tell you what I've got on my mind:


When I get out in no man's land, they'll soon found out I'm no fool
I don't mind fighting for my Uncle Sam, not in partnership with nobody's mule
Now suppose that mule would balk on the firing line, that's where I'd leave him about a thousand miles behind


When I get out in no man's land, I can't be bothered with nobody's mule (not even my pappy's)"


Now I joined the Salvation Army about seven years ago, just to wear a uniform so bright
All at once I was called up to go and fight
Not thinking that everything would be right


Now the captain said, the healthy men must go right straight to the front
Because they was going to be just fine
There was me and that mule, we did deep down have a bad cold
Right there we got the first choice of the firing line


When I got out in no Man's Land, they soon found out I wasn't no fool
I didn't mind fighting for my Uncle Sam most anytime, but not in partnership with a mule
Now suppose that captain hollered "Boy, more then attack, how in the world would that mule help any man fight


When I got out in no Man's Land, they soon found out I wasn't no fool
I hope you heard me

Mules were commonly used in addition to horses by world war one troops.

Blind Lemon Jefferson also addressed the blues situation of a man being sent to war in the first verse of Wartime Blues from 1926:

Mike, it would be awesome if you made a .zip file with each of the songs from the podcasts in .mp3 format available for downlod. I'd love to ad d these songs to my playlists but don't have the time to go through and cut them out of the podcast. Don't get me wrong, I love listening to the podcast but also like listening to all my music in random order...

Anonymous said...
This comment has been removed by a blog administrator.
6:02 PM

Anonymous said...
This comment has been removed by a blog administrator.
6:02 PM

If you cannot see the audio controls, your browser does not support the audio element This time we’ll revisit songs about disease. Th...

Listen to the podcast in itunes